Joy Riding in a Time Machine: Baker's Electric Cars
This is an overview of the first electric cars and how they were marketed.
In Search of the Rarest Christmas Ornament
A research librarian from Corning Museum of Glass stated that the history of glass blowing and American Christmas ornament manufacturing was changed after I discovered this lost article (with photographs) in a 1919 edition of Scientific American Magazine.
Cabin Classics
Over 40 hours of research, including interviews with 28 people documented the lost history of Michigan's early rustic furniture makers. Published in Michigan History Magazine as well as for 3 editions (East Coast, Central and West Coast) of Antique Week and The Auction Exchange, MidCountry Media, Indiana.
Early Motoring Apparel
There was a time when driving was considered sport, regardless if the outing was a shopping excursion to the nearest town, or a Sunday afternoon picnic on the local beach. It also was essential to protect expensive clothing from the oil, dirt, mud, weather, insects and other mishaps associated with motoring along the way. Specialized clothing was required and in demand for decades. This article describes motoring apparel for men, women, and even children with rare images from the Automotive Research Library in Mesa, CA

Marilynn Miller: In Search of the Silver Lining
Marilyn Monroe was named after Marilynn Miller. When she married playwright Arthur Miller, she became Marilyn Miller and the two actresses became eerily alike in more than just a shared name. This article explores the romantic, tragic life of the early Ziegfeld Follies superstar, actress and high fashion model. After countless hours of research, I have discovered the clues as to how the love of her life, Frank Carter, and the world's most expensive car in 1920 forever changed her destiny. The car, according to leading classic automobile experts today, is likely still in existence but has yet to be found. Article published by MidCountry Media with more extensive work in progress.

Moonshine or No, Drinks in Prohibition Era Had a Kick
Today we call them artisan cocktails. Back then they were called illegal. No matter what legislators try to impose in public, history proves that everyone enjoys a bit of the buzz. This article outlines concoctions served at speakeasies as well as teetotalers' teas where they enjoyed another kind of high from drinks made from excessively sugary syrups and strong caffeine.

Moonshine or No, Drinks in Prohibition Era Had a Kick 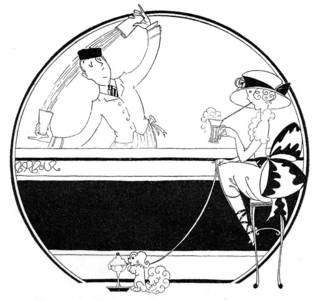 Pen and ink drawing by renowned 1920s illustrator John Barbour from "The Designer & The Woman's Magazine" July 1921. Image from the library collection of Julia Henri.

This was the time of flappers, fringed dresses
and raucous jazz hidden behind closed doors….

When the United States went dry in January of 1920, homemade copper stills were secreted away behind isolated barns or hidden miles within heavily wooded areas. These moonshine distilleries supplied illegal watering holes called speakeasies for the following 13 years until Prohibition ended on December 5, 1933. The sweet drink concoctions that were sold at these notorious barrooms and dance halls were specially created to cover up the nasty taste of rotgut gin.

Yet Prohibitionists were thirsty too and at their afternoon teas had a different kind of kick: caffeine and sugar. Refined fruit punches and cool sorbets were built from recipes that included ultra-sweet fruit purées and heavy black teas. Prohibitionists’ drinks will take the nod right out of you on a hot, humid summer day.

Nearly every fashion and home decorating magazine during Prohibition had drink, frappé and icy sorbet recipes that were served with tiny cakes and tea sandwiches. Although alcohol is never mentioned in any way, the recipes are perfectly tasty with or without a jigger of alcohol and a dollop of cream.

Frappés were a favorite frosty beverage for Prohibitionists and by the 1920s, everyone had ice boxes in their kitchens so these were easy to make. In fact, if you were wealthy enough by 1926, you might even afford the newest in electric domestic refrigerators that sold for a whopping $285 when the average salary that year was $2100.

Frappés were slushy, frozen fruity concoctions that were favored during especially hot weather in an era before air conditioning. The inexpensive ingredients could be found in most gardens or marketplace, just as they are today.

The recipe below was created by food editor Alice Bradley during the mid-1920s. By the time this recipe appeared in the July 1926 edition of Woman’s Home Companion, she was also the sole owner of Fannie Farmer’s School of Cookery in Boston. The drink is surprisingly delicious and may well become a favorite in your own home. It may be served like a “slushy” or frozen solid as a sorbet from any home refrigerator freezer. No ice cream maker required!

Cook rhubarb, cut in small pieces, with water until soft.
Squeeze through s, add sugar and boil until sugar is dissolved.
Add fruit juices and strain through a metal strainer, chinois or double layer of cheesecloth.
Add salt, and only a pinch. This will make the rhubarb burst with flavor.
Mix thoroughly in a stainless steel bowl then chill in your refrigerator’s freezer to a slushy consistency.
Garnish with mint leaves.

Note: Freeze the remaining rhubarb pulp for use in pies or other rhubarb treats. Add 1-1/2 cups black assam tea and/or a jigger or two to taste of lemon infused vodka depending on your vote pro or against Prohibition.
•••

Another popular Frappé recipe from the 1920s was created by cooking author Mary Mason Wright in the July 1921 issue of The Designer and Women's Magazine: "Frappés are frozen just half-way between a punch and an ice,” she wrote, adding that this beverage style could also be served as a substitute for soup courses during the summer months. The name is derived from the base of black India tea.

"Boil the sugar and water to a sirup (sic), then when cool add the fruit-juices."
"Add the tea and enough (additional) water to make two quarts and freeze to a mushy consistency.
Then add a cup of crushed fruit."

Garnish with a sprig of mint and a slice of orange on each glass.

Note: For those who might enjoy a little 1920s speakeasy nostalgia...simply add one shot of citrus infused vodka to each glass, shake and serve.

This coffee and orange ice or sorbet has whipped cream folded into it after it has set into a slushy consistency. It is then returned to the freezer until solid. Again, the recipe is perfect for that additional scandalous splash of orange liquor or rum.

The orange-sirup is made by adding two cups of sugar and one cup of orange-juice and boiling down to a thick sirup. When cool, add the coffee into which the dissolved gelatin has been stirred while hot. Freeze to a mushy consistency, then stir in one pint or less of whipped cream. Pack down and freeze until solid.

According to Alice Bradley, “Afternoon luncheons on the porch are one of the most delightful ways of repaying social obligations. Then too, it makes a pleasant ending for a club meeting or a bridge party. If your guests prefer iced tea, pass cream and sugar, quartered slices of lemon garnished with bits of candied cherry and whole cloves, or a spiced sirup (sic)." Bradley also advised that simple sandwiches and cakes should always be offered alongside the frappés and iced drinks.

Note:
These are amazingly simple nutmeat and ginger finger sandwiches.
The recipe is inexpensive to make and surprisingly tasty.

Here's a few helpful hints:
• Finely grate about 3 inches of fresh ginger root
and add this, along with its juice, to about 1/2 cup soft cream cheese so that it is spreadable.
• About 1/2 cup finely chopped pecans or walnuts will work for this recipe.
• The sandwiches stay together perfectly when the cream cheese mixture is spread over both slices of tea bread.
• Place a single layer of fresh watercress leaves over one slice before closing the sandwich.
• Be sure to trim off the crusts, then slice again into 4 long, thin finger sandwich strips.

Mix with corn syrup and sugar in top of double boiler
Add color to make a delicate pink.
Stir and cook until mixture clings to spoon.
Carefully fold in the white of one egg and cook until mixture feels sticky when tried between fingers.
Spread in wet pan, cover with wet paper, and cool.
Then, chill in refrigerator.
Shape into balls, first dipping hands in cold water.
If 1-1/2 tablespoons of mixture are used for each, 10 cakes can be made.
Heat a tin sheet slightly and rub with cooking oil.
Place balls on sheet and bake in slow oven about 20 minutes, being careful that they do not lose their color.

Note:
• To simplify the process, use finely grated coconut from the baking section of the local grocery. If it is too dry and doesn’t resemble the moist nature of fresh coconut, use 2-3 tablespoons of water to rehydrate.
• Superfine Baker's Sugar works best instead of coarse table sugar. The measurements for both are the same.
• Inexpensive food coloring will create a lovely pink shade. Do take time to mix the color thoroughly. Please only use a very tiny drop to achieve the light pink color.
• Bake in a convection oven at 285 degrees for 20 minutes. Coconut cakes should be removed before they turn golden brown to retain their light pink color and texture. They will set up after they cool.
• The recipe makes 10 bite sized cakes...but you'll wish you had more!

By 1939, the men’s magazine Esquire was running a regular monthly section called “Potables.” The articles were lengthy and racy, although alcoholic drink and food related. Of course this was all in sharp contrast to the laws and opinions of liquored beverages that predominated life only 6 years before. In fact, by the mid-1930s cocktail hour was part of daily life. The Esquire Potables correspondents, as they were called, offered their favorite recipes and personal opinions on just about every aspect and virtue in the fine art of crafting cocktails. Below are drink recipes from the June issue, 1939.

Note: A gill is a unit of measurement that is no longer in use. It equals 5 ounces typically. However, in this article a gill is defined as: “The gill is 1/4 pint.”

Shake well but do not strain and serve in glass garnished with slices of pineapple, orange and cherries.

Stir with cracked ice, strain into glass, first wetting the brim with lemon and sugar.

Into a bowl put 1/2 cup granulated sugar and juice of 4 large grapefruit.
Stir to dissolve the sugar and add 1 bottle of Rum, 4 ounces Brandy and 4 ounces of Benedictine,
2 teaspoons of Bitters, and the juice of 1 lime. Stir well and add 1/2 nutmeg grated and the peeling of 1 lime.